WE HAVE HAD SUCCESS WITH!

The Advanced Nerve and Health Center has successfully treated more than 1,000 patients with the following conditions.

Diabetic neuropathies are a family of nerve disorders caused by diabetes. People with diabetes can develop nerve damage in every organ system including the digestive system, urinary tract, sex organs, blood vessels and heart.

Chemotherapy-induced peripheral neuropathy is a disabling side effect of cancer treatment where distant nerves located away from the brain and spinal cord are damaged. These distant nerves are called pheripheral nerves and carry sensations to the brain that control the movement of our arms and legs as well as the bladder and bowel.

Idiopathic Peripheral Neuropathy usually occurs in people over 60 and progresses slowly and can be very disruptive to a person’s normal life and lifestyle. Doctors call this disorder “idiopathic” which means unknown cause.

The medical community is starting to understand that if pain is no longer a function of a healthy nervous system the chronic pain itself is the problem and is considered a disease. Advanced neuroimaging has shown that chronic pain, unlike acute or short-term pain, can cause structural changes in the brain that add to the risk of cognitive problems as well as anxiety and depression.

NLI’s revolutionary combination of 8 complementary technologies enables professional athletes and others suffering from sports-related injuries back in the game in record time. One major advantage of NLI’s proprietary treatments is they can be used immediately after injury and continued throughout the healing process to more quickly reduce pain and speed healing of all body tissues–muscle, tendon, ligament and bone. Laser therapy is used by professional sports teams including the New York Yankees and the Cincinnati Bengals. Dr. Ben Lerner, one of NLI’s co-founders, is a former college All-American wrestler, and was first named as a doctor and wellness advisor for the USA Wrestling World Team in 1995. He has traveled with USAW to the Atlanta, Sydney, London, and Rio Olympic Games as well as eight world championships.

Plantar fasciitis is an overuse injury caused by repetitive over-stretching of the plantar fascia which is is thick band of tendon that runs under the foot. Through overuse the fascia can become inflamed and painful where it attaches to the heel bone. While overuse is ultimately its cause, other factors can increase the likelihood for injury including the feet turning inward, high arches, tight calf muscles, poor footwear, being overweight and previous injury to the foot.

If you have been to other doctors and experienced laser therapy you may wonder how our treatment is different. First and foremost, the laser is very important and must penetrate deep enough into the skin to make a difference. With our lasers you will feel the power! But the secret to our success is a comprehensive process of multiple technologies and therapies that when combined restore your body’s own natural healing abilities.

A balance disorder is a condition that makes you feel unsteady or dizzy as if you are moving, spinning or floating even though you are standing still or lying down. Balance disorders can be caused by certain health conditions, medications or a problem in the inner ear or the brain. Our sense of balance is primarily controlled by a maze-like structure in our inner ear called the labyrinth which is comprised of bone and soft tissue.

Pain Postsurgical pain is defined as pain lasting more than 3 to 6 months after surgery. The pain differs in quality and location from pain experienced prior to surgeryand is usually associated with neuropathic pain caused by surgical injury to a major peripheral nerve.

Spinal stenosis is an abnormal narrowing of the spaces within your spine which can put pressure on the nerves that travel through the spine. Spinal stenosis occurs most often in the lower back and the neck and symptoms include pain, numbness, paraesthesia, and loss of motor control. Spinal stenosis is most commonly caused by wear-and-tear changes in the spine related to osteoarthritis.

A herniated disc refers to a problem with one of the rubbery cushions called discs between the individual bones that stack together to make up your spine. Sometimes called a slipped disc, a herniated disk occurs when some of the softer jelly inside the disc pushes out through a tear in its tougher exterior. Herniated discs can irritate nearby nerves resulting in pain, numbness or weakness.

Muscle weakness occurs when one is unable to produce a normal muscle contraction or movement. In order to function properly even just to maintain muscle tone and avoid atrophy, muscles require innervation which the distribution of nerve fibrers to an organ or body region.

Knee pain can be caused by injury, mechanical problems, certain types of arthritis and other problems. Some knee injuries and medical conditions, such as osteoarthritis, can lead to increasing pain, joint damage and disability if left untreated.

Ready to take the next step?

If you have nerve damage, neuropathy, pain, or suffering due to muscle, ligament, or tendon issues, Advanced Nerve and Health Center Doctors of Chiropractic are trained in a proprietary method of helping reversed nerve damage that has helped thousands of patients regain their lives. 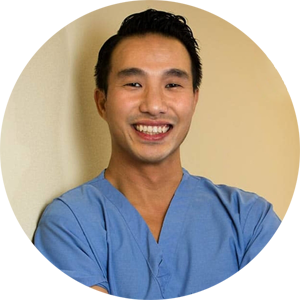 My mission is to heal the world of nerve damage. I want to help people who have not been able to find a solution to their nerve problems.

How Can We Help?

YOUR PATH TO RELIEF STARTS WITH A CONVERSATION